Simplify Your Note-taking with the Brand-new Note Feature

A lightweight Note feature has recently come to TickTick! What is Note? How can it be useful? Read through to take your productivity to the next level! What is Note? Note is a feature that can mainly be used to simplify your note-taking process at TickTick. The confusion may immediately rise between some of you who’ve already been used to having task descriptions for this purpose. Indeed, descriptions could be used for keeping some simple notes of the task. However, limitations were quite obvious too: For one thing, it doesn’t look like a note but still a task associated with your schedule, priority and arrangement; for another, once the task is completed, the description within it will also be gone. Thus, to provide you with a more intuitive note-taking process, and an individual space to save notes in order for you to look back at anytime, here comes the Note! How to access Note? To add a Note To add a Note, you need to first add a Note-type list (There are two types of list now: Note and Task). Accessing from “Add List” at the bottom of the left sidebar > Unfold to see the List Type* > Select 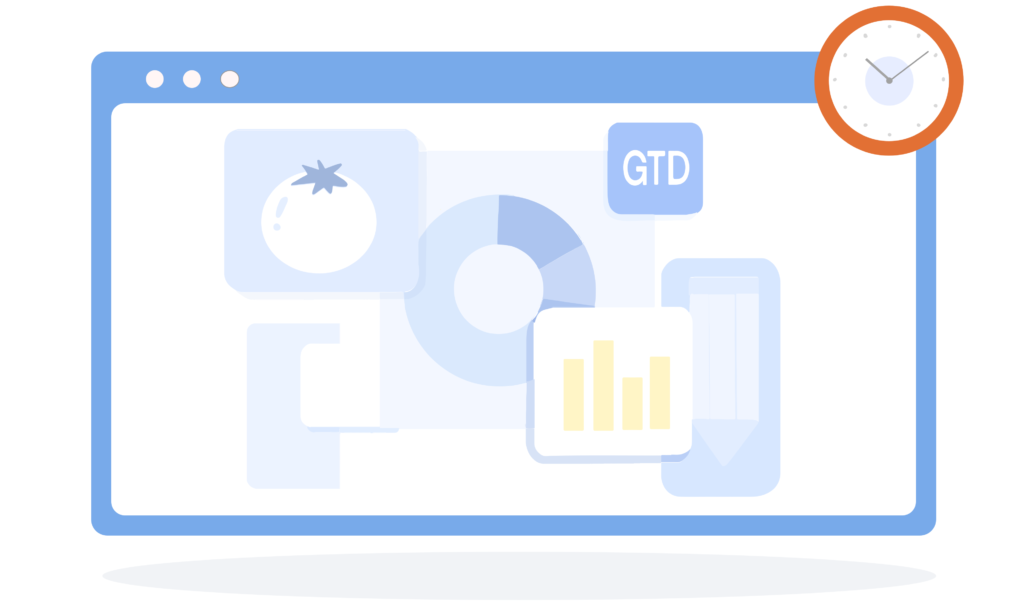 Review of Recent Updates in TickTick

Autumn is approaching as August officially passed. Since last time we’ve done the feature review, TickTick has kept trying hard to roll out new features, as well as improving the existing ones in the past few months. Then, what major improvements have recently been made in TickTick? Read on to have yourself a quick wrap up. Spoiler alert in the end! Break down a complex task with Task Nesting Beforehand, there wasn’t a complete subtask feature, only a Checklist in the task description. The Checklist used to be a lightweight version of subtasks, because what you could do with it was only setting a due date and letting TickTick remind you. However, the feedback we’ve continuously received from you guys has driven us to fully develop a complete subtask feature, which is why we introduced Task Nesting!  Task Nesting is the real subtask foundation, which allows you to cut a huge task into digestible chunks, and chucks to slices if you’d like, with altogether 5 levels supported. It complies with GTD method to help you stay organized by empowering each subtask the functionality that a task has, whether setting due dates or priority, assigning, adding tags, or keeping details in 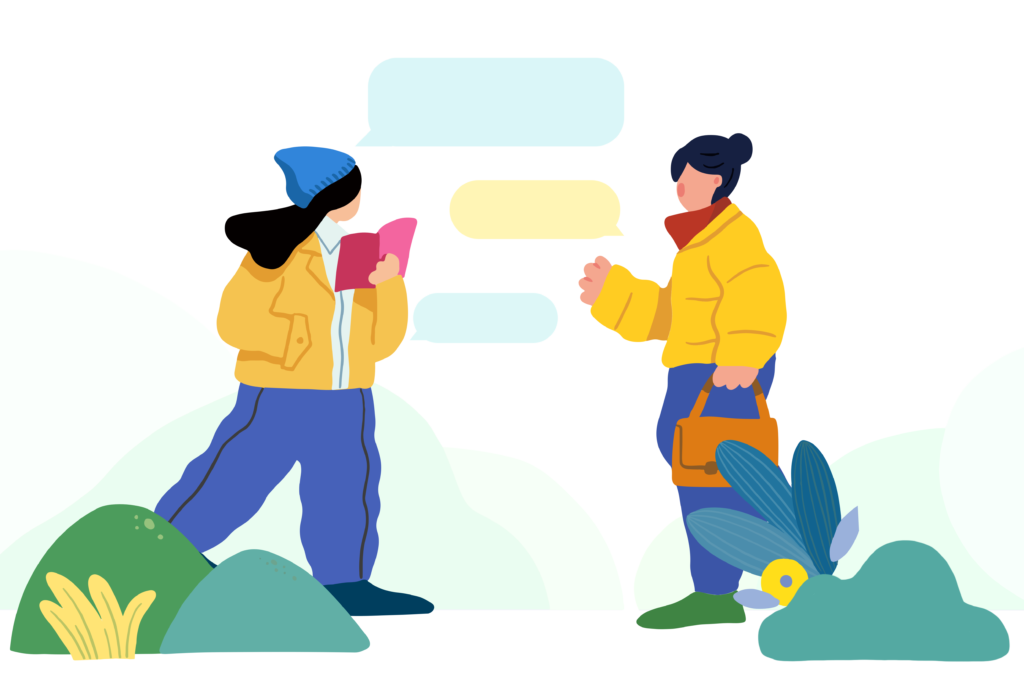 Special Offers for Students and Educators Gone through the “Sci-Fi movie” called 2020, life goes on and unfolds new challenges for us all, especially for those students and teachers who have just experienced not-so-efficient remote learning and for those who are new to the college this autumn. At this key stage, turning life into a new page and getting more focused on what’s happening next is obviously important.  TickTick is here to help you gain more control back over the new challenges in the coming school year, with the special educational discount for all qualifying students and faculties! There are up to three benefits that you can enjoy: 1. All enrolled students and educators are eligible for a 25% discount when upgrading to TickTick yearly premium. This is a long-lasting program. Learn how to apply. 2. From today to 30th of September, everyone who successfully upgraded to premium through our special offer for education, can get 3 extra one-month TickTick premium gift codes! This is for you to share with any of your schoolmates, colleagues or friends, which means they can enjoy the one-month TickTick premium service totally for free! 3. If any of your friends who used your codes 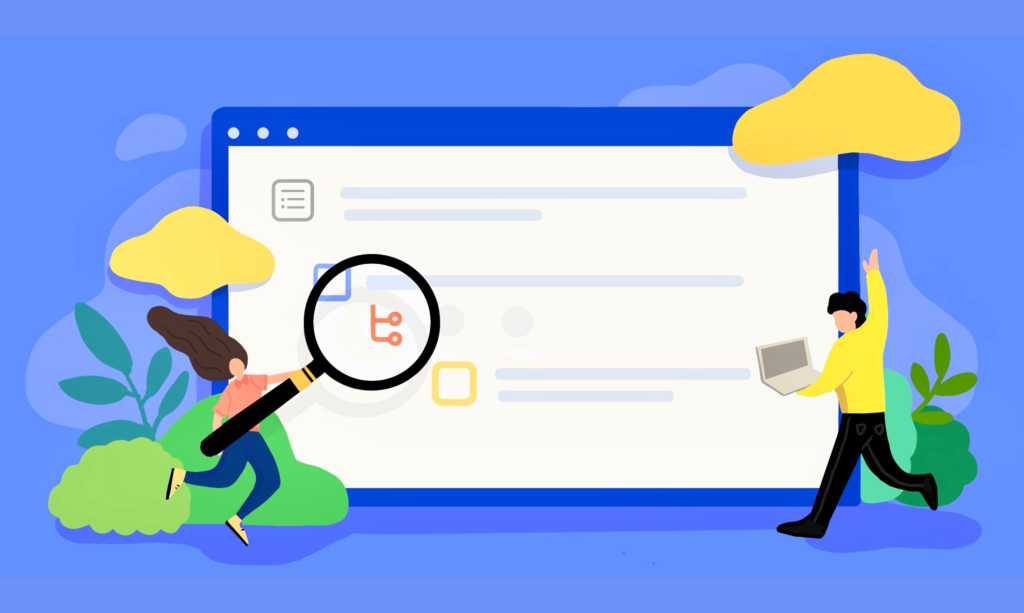 The 4Ds Framework: How Task Nesting Helps You with GTD

What is Task Nesting? Commonly used in Computer Science and Informatics, Nesting usually means where information is organized in layers and locked up with hierarchy. Following the same concept, Task Nesting here simply means task hierarchy. This means, different tasks can always be logically connected rather than sparsely scattered in your to-do list. A complex task can also be split into multi-layer subtasks (up till 5 layers including the parent task)! In general, it’s like a “family tree” that all the tasks can find their own place. Task Nesting vs. Check Item  Some of you might already be wondering, “Did the Subtask feature already exist, which you could access in the task description? Why is there a new Subtask feature?” The previous Subtask (now renamed as Check Item), lying in the task description section, functions more like a checklist. You can split a task, e.g. packing for a trip, into multiple subtasks, and also set reminders for each task. However, what you could not do in there is sub-dividing it into more grades, or setting priority and tags for subtasks. Therefore, we have renamed it as “Check Item” and it still remains in the task description. As for the 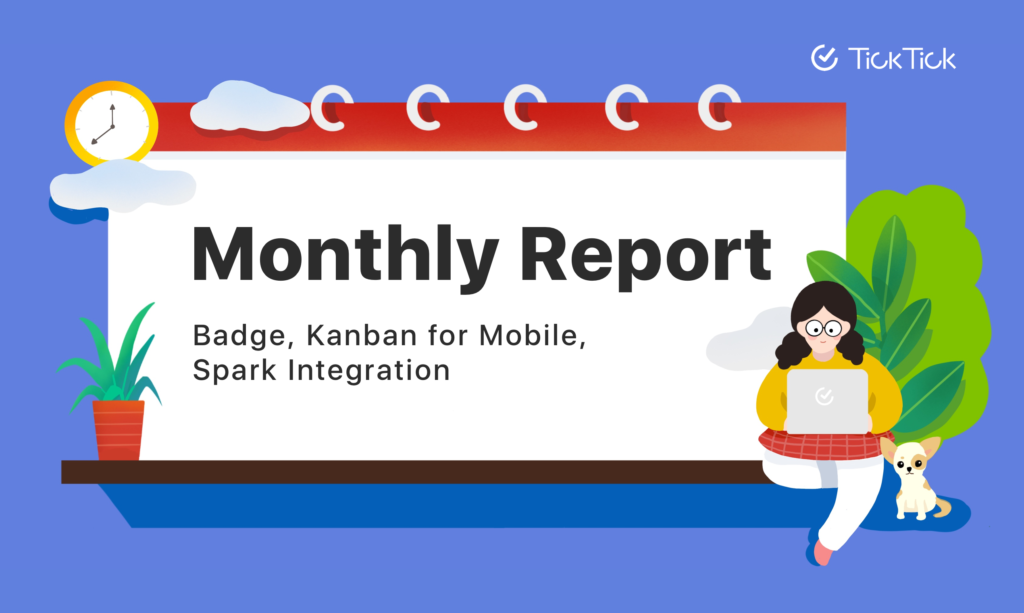 Tick Tick Tick Tick… we’ve officially walked into the second half of the year 2020! Daytime becomes longer and TickTick has also speeded its way to progress. See what has recently been added and find what surprises you most. Spoiler alert in the end!   Track Every Step of Your Progress with My Badge  What is Badge? The Badge is kinda like an approval and a reward to your achievements at TickTick. It makes every step of your accomplishments visible and trackable. For example, the days you’ve been using TickTick, the months you’ve joined Premium, the number of tasks you’ve accomplished, the total amount of time you’ve been focused on tasks, the number of friends you’ve invited, and the times you’ve checked in your habits. Every tiny progress you’ve made deserves a place in your overall achievement. They will automatically be counted and converted into badges. 6 different types of Badges * Learn more about the details and algorithm of Badge. The reason why we included Badge here at TickTick is we wish it could function as a gentle reminder not a stress trigger. It can tell you sometimes, “Hey, I know life is full of tasks and challenges, but 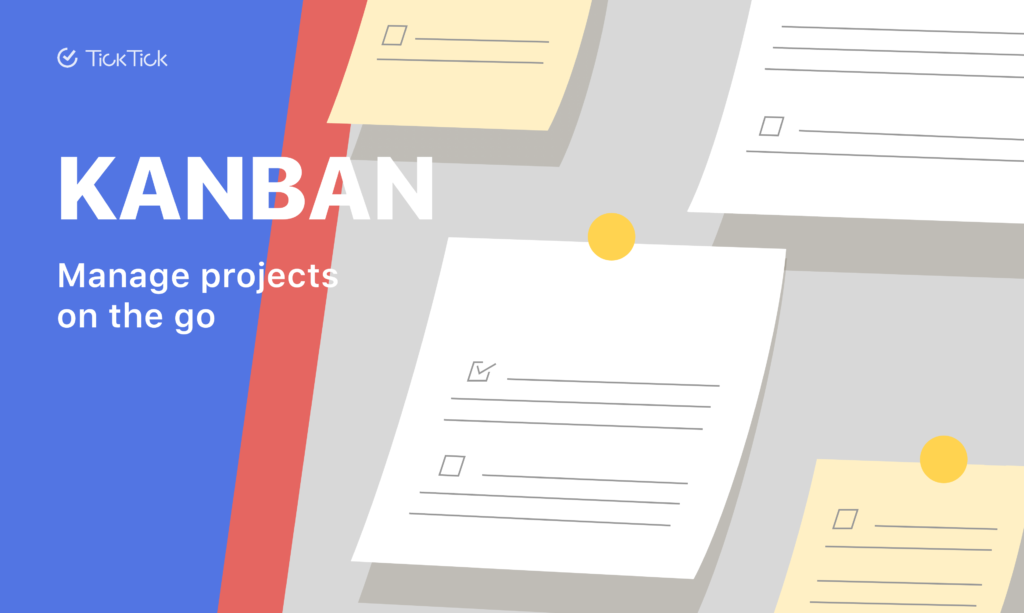 Kanban 101: Manage Projects on the go with Kanban on Mobile!

Ever since the last time we released Kanban on Mac, Windows and Web, we’ve heard it multiple times for Kanban on mobile. Now, it’s all happening! This article will walk you through how to make the best use of Kanban View at TickTick mobile versions to visualize and streamline your workflow! What is Kanban? Some of you may never heard of Kanban or not be very familiar with what it is, but I suppose you’ve all ever seen a whiteboard with many sticky notes placed under different sections. That is exactly what Kanban is! In a simple term, Kanban is a project management method to help you visualize your workflow. It was first used by line-workers in Toyota’s factory. They’ve found a visual card showing what needs to be done and when, has helped a lot with the process of production. It has then been wide-spread and used by many others in other industries as well. TickTick embraced Kanban and made it available on desktop versions not so long ago. Now, we’ve brought it to mobile versions, in order to help you manage your projects anywhere and anytime! Step-by-step guide of using Kanban  1. Where to find Kanban on your smart 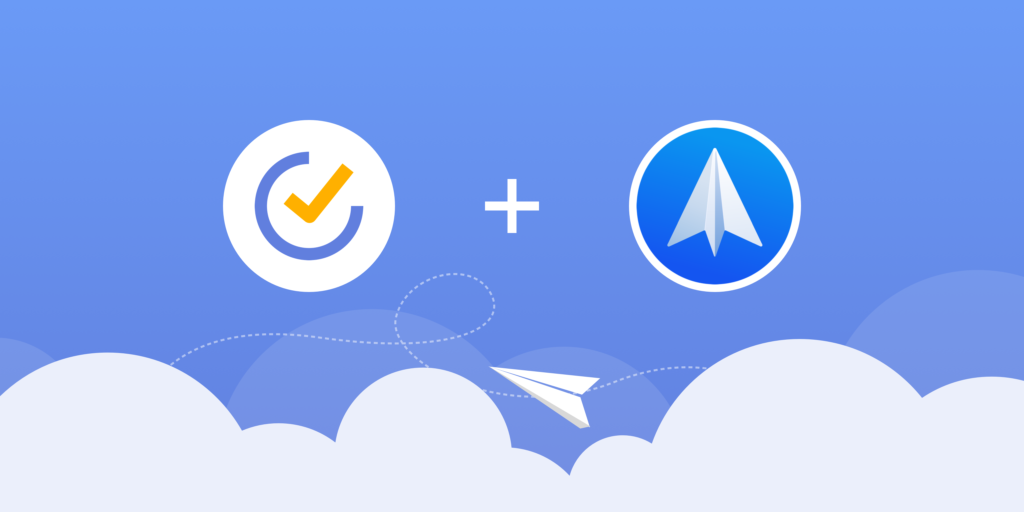 Connect TickTick to Your Spark Inbox

The integration with Spark has long been an eagerly anticipated feature for both TickTick and Spark users. Finally, it’s exciting to share the news that together with Spark, we make it happen! Stay on top of your email tasks and get more things done with TickTick + Spark ✅  📧 What is Spark? Over 1 million people rely on Spark email to manage their personal and team inboxes. The app aims to help you take more control of your inbox and boost productivity. Email is an essential tool that is used worldwide. With Spark, you can focus on important emails by intelligently prioritizing your emails, get peace of mind with distraction-free email, and streamline your workflow from inbox to task management tools by connecting with brilliant 3rd party integrations. 💡 What to achieve with the TickTick + Spark integration? With the Spark integration, you can now turn emails into tasks and export them to TickTick in just a few clicks. 🔗 How to connect TickTick to Spark? 1. Make sure you have both apps installed on your Mac, iPhone, or iPad (the integration will be on Android in the future – will keep you posted). 2. In Spark on Mac,

A Brief Review of the Recent Updates of TickTick

👋 Approaching the mid of 2020, TickTick has walked a long way to keep making itself a better tool for you, our lovely users! In the recent months, there were also some great improvements. This review is to give you more insights of what has been upgraded and what yet to come.   What has been improved recently? A brand-new “Focus” evolved from “Pomo” ⏱️ A new Stopwatch mode to count up your Focus time Stopwatch has been added to “Focus” to enable you to easily track the time spent on the task that you were not sure for how long it would take. It also provides another option for those who do not wish to be interrupted by a Pomo timer while conducting work. This new Stopwatch, together with Pomo, has made the way to count and track your focused hours at TickTick becomes even easier and more well-rounded. 🍅 Pomo timer can support pause A more personalized Pomo timer is the one that can let you pause and resume according to your own pace at work. However, only three chances to pause because we still wish you to stay focused. 🌧️ Enriched White Noise for background sounds In 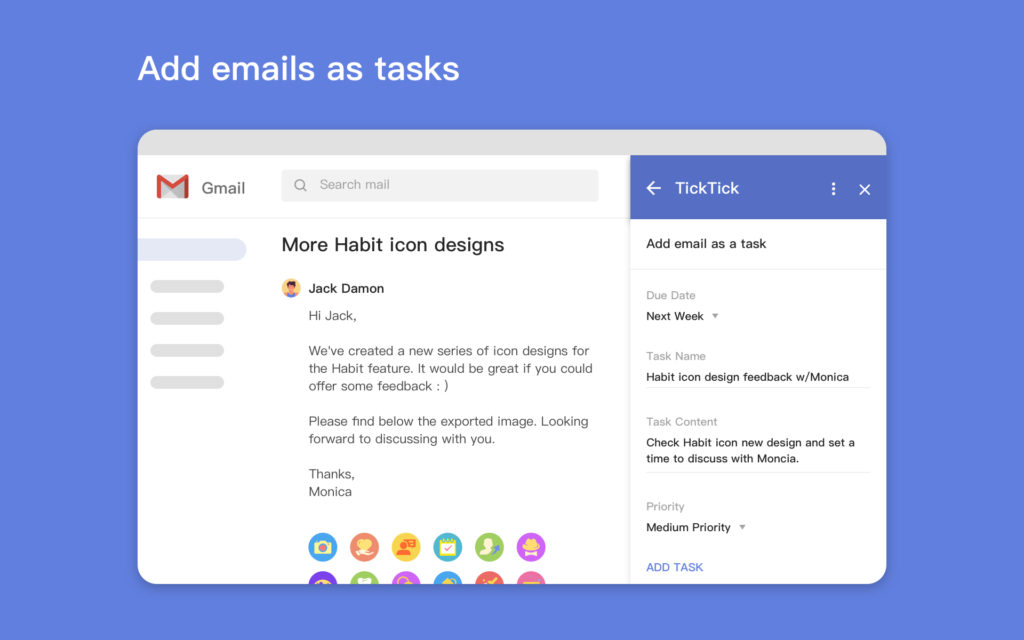 Handle Your Inbox More Efficiently With TickTick for Gmail